Hydrating for over a decade

With a staff force brimming with talented journalists, designers, marketers and advertising pros, sharp, creative minds are in abundance. To keep those minds on top form, Time Inc. UK’s Jenny Noon, facilities and real estate director and Steve Fox, head of facilities, know all too well the importance of quality drinks in the workplace. That’s why, for the past decade, Zip Water UK’s HydroTaps have been the firm’s drinking appliance of choice.

As of 2017, 19 commercial Zip HydroTap Classics – dispensing filtered boiling and chilled water – keep 1300 employees hydrated across six of the company’s locations. These include London’s award-winning Blue Fin Building on Southwark St. and the recently fitted 161 Marsh Wall in Canary Wharf.

But it wasn’t always that way, says Jenny: “Before being aware of Zip, we used kettles and cooled water bottle systems – and we had a lot of issues with the water bottles! They were a pain to store, with spare and empty bottles always lying around, they looked awful and staff found them difficult to handle.”

“They were very heavy,” Steve adds. “People sometimes dropped them, creating a huge mess if they split. They didn’t always keep cold either; sometimes the cooling system would fail or if they were near sunlight, the water would heat up and go green!”

Aware that a change was needed, Time Inc. UK was introduced to Zip in 2007 through their architects TP Bennett. “We needed a more efficient, safer and reliable way of providing boiling and chilled water. So when TP Bennett began fitting out the Blue Fin Building and suggested we switch to the HydroTap, we were sold,” Steve explains.

“We looked at lots of options and brands but having trialled various taps including the HydroTap, we concluded Zip was the best on the market. They looked fantastic, were easy to use and offered the best capacity. From then on, we’ve only ever used Zip.” 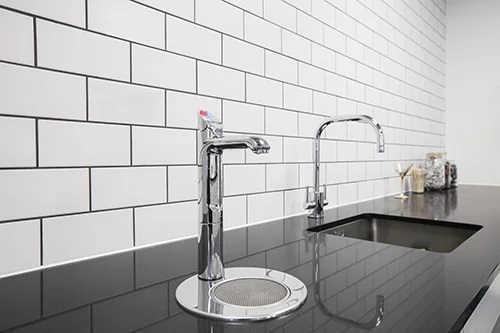 Jenny adds: “We wanted something that looked more domestic than corporate to complement the modern look of our office interiors and Zip does just that; they’re discreet and sleek, but really functional. As well as looking better, the HydroTap wins over water bottles in every sense. They don’t require deliveries, so are a greener option, don’t run out and the water’s always cold. It’s also great ditching the kettles; no more waiting around for the water to boil and no more safety risks. With the millions of cups of tea that have been made over the past 10 years, we haven’t had one single accident. They’re truly hard to beat. We haven’t come across anything that’s better.”

With Jenny and Steve’s comments in mind, it comes as no surprise that when the business decided to open an additional office at Marsh Wall in January 2017, six Zip HydroTaps were fitted; one for each kitchen.

“Everyone that relocated to Marsh Wall came from the Blue Fin Building or another building with HydroTaps, so they’re all used to Zip. We’ve raised the bar and it’s become the expectation. But I’m certain staff appreciate it; they’d be up in arms if they were taken away!” says Jenny, who concludes by noting it’s not just the employees benefitting from the taps. “Because of the type of business Time Inc. UK is, quality drinks are key for visitors too and fresh, chilled water is very sophisticated. It says a lot about the organisation.”

View the range of Classic HydroTaps