With a face that’s one of YouTube’s most influential and London Collections Men’s most documented, blogger, model and writer Jim Chapman is famous for his impeccable sense of style. So much so, he was named the 17th ‘Best Dressed Man in Britain’ of 2015 by GQ – the UK’s leading men’s style magazine where he’s now contributing editor.

However, Jim’s skills within the realms of fashion, he admits, don’t translate into the world of décor. Thankfully, his wife Tanya Burr – an equally influential blogger, covering everything from makeup tutorials and beauty tips to décor and baking – takes the lead when it comes to their West London home’s interior design. “My house does look lovely, but it’s nothing to do with me – my wife is completely in charge!” he jokes.

Living with their miniature dashund Martha, Jim and Tanya film many of their YouTube blogs from their London base, entertaining a combined 7.2 million YouTube subscribers. While their blogs cover a variety of topics, both share a real passion for baking. In fact, Jim dedicates a segment on his YouTube channel to #bakingwithJim, and for Tanya, it’s a passion that’s lead her to publish her very own cookbook ‘Tanya Bakes’. As such, many of the couple’s video diaries centre around the heart of the home – the kitchen.

Describing their kitchen style as “homely, functional and stylish”, it’s not surprising that when Jim decided he wanted an instant boiling water tap, his first choice was the Zip HydroTap. An appliance that’s as stylish as it is functional, the HydroTap not only looks at home in any design-led kitchen, but even dispenses filtered chilled and sparkling water, as well as boiling. 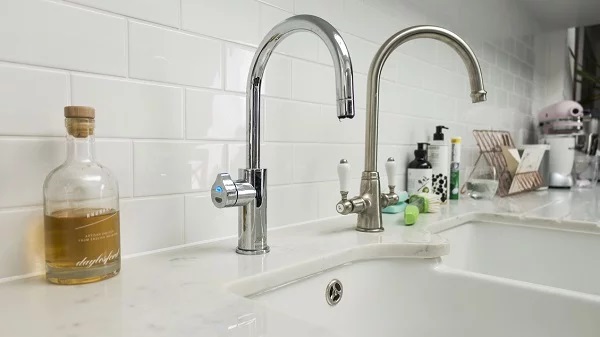 With six designs and 12 colors to choose from, Jim went with the Arc in chrome, perfectly complementing the pair’s classic kitchen aesthetic and coordinating beautifully with cabinet’s existing metal accents.

Sitting pride of place over a generously sized double butler sink, the HydroTap has been fantastically useful for both baking and cooking: “It’s speeded up the whole process! I was melting chocolate for a baking video the other day and it was so handy to have water that was already boiling.”

With the kitchen and adjoining dining room being a very social space, Jim says the appliance is also great for hosting parties; whether that’s making sparkling cocktails or after-dinner coffees. “We love to host parties,” he says. “We have two annual parties one at Christmas and one in the summer. We hosted our summer party the week after the HydroTap was installed and it went down a treat!”

With convenience key, he goes on to comment on a few of the other benefits of having a HydroTap at home: “The water previously was lukewarm and we used to have to run it for a long time to get it cold. The HydroTap has made a huge difference in that respect. I use it mostly for the chilled filtered water and I reckon I’ve drunk more water since it was installed. I was never much of a tea drinker, but am finding myself make it much more now – it’s just so easy and everything just tastes so much cleaner.”

Great for baking, cooking, entertaining and boosting hydration, Jim finishes by noting it’s not just him and Tanya benefitting from the kitchen’s newest addition: “Over some of the recent hot days, we’ve even treated Martha to chilled filtered water from the HydroTap – and she loves it!”