Public perceptions of Australia Post are largely shaped by the organisation’s ongoing efforts to adapt its mail service and massive retail network to the changing needs of customers in an era of digital communication, ubiquitous social media and online shopping. It’s heartening, then, to discover in this more than 200-year-old company’s six-floor, 11,000 squaremetre refit at 180 Lonsdale Street by Gray Puksand a diverse workforce wholeheartedly embracing fundamental change with substance, style and a focus on staff health and wellbeing in the workplace.

The new office unites close to 1000 Australia Post employees from three very different locations including a Mount Waverley call centre: pre-activity based working (ABW) environments in which it was easy for people to become “set in their desks and in their ways,” according to Australia Post’s project director of the 180 Lonsdale Street Refurbishment, Sandra Maltman. By consolidating departments as diverse as real estate, procurement and marketing in an activity-based environment designed to encourage flexibility, spontaneous collaboration and creative problem solving via shared spaces that adapt easily to users’ needs, Australia Post was keen to co-locate relevant groups, promote fresh ways of working, and adapt to changing needs, (call centre staffing increases to manage the annual October-January peak season, for example). Ultimately, of course, the aim was better customer service from happier, more empowered staff, which would reduce turnover and absenteeism in the process. 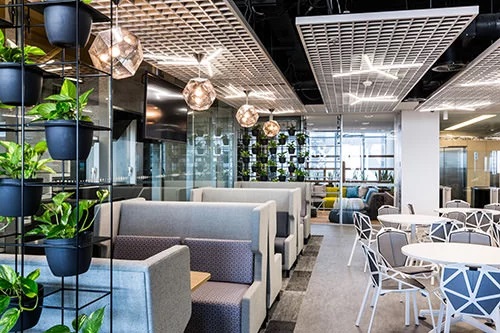 A veteran of multiple moves, Maltman knew skilful change management and internal communications would be essential in allaying fears about losses like car parking, assigned desks and offices and achieving genuine buy-in. She was delighted to discover that when diverse groups from executive teams to young, transient call centre workers began discussing their vision for the new environment, key aspirations were shared. “Productivity, collaboration, interaction, the ability to have those in-the-moment discussions rather than, ‘Oh, let’s get back to that in an hour when the meeting room is free’ … we found that really important,” Maltman says. “We were really impressed that the management and what they were looking for was exactly the same as what staff wanted from a workplace, and we found (it) really invigorating to be able to (provide it).”

Heidi Smith, Project Leader and Partner at Gray Puksand, says remarkably informed, enthusiastic staff engagement shaped a design that’s now widely understood and effectively used. At its core are a host of wellbeing initiatives including a games room housing Fussball and Playstation, a creative lounge where jigsaws and colouring books are forever on the go, a lending library of magazines and books, and a winter garden complete with white wicker furniture, expansive views and a lovely sense of space provided by a tripleheight void.

“A lot of the basics, the fundamentals, staff already know they get from Australia Post,”
Smith says. “For us the underlying theme that came on top of that was what we feel is the next step for workspace, which is the whole wellbeing piece – how do you support people’s hearts and souls in the working environment to encourage them to stay and to flourish and to really build on that whole idea around collaboration and creativity? That’s all very well but if your staff aren’t really at peace and happy then those things can be a little strained no matter what the space looks like.”

The re-fit uses the metaphor of weaving disparate groups and working styles into a strong, dynamic tapestry, assigning a theme to each floor that reflects its focus and informs a distinctive palette of colours and materials as well as striking furniture and lighting designs by Australian outfits including Jardan, Derlot and Satelight. 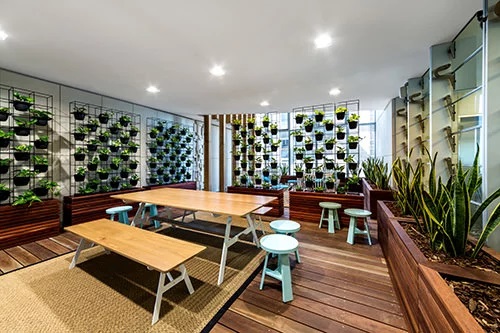 Level 21, for example, is centred on Community. Employees and visitors are warmly welcomed via natural timbers, vibrant plants and a casual reception with a communal table for spontaneous meetings and a lighting installation by Buildcorp and Steel Stylist with Ballboy pendants by Dean Phillips Lighting. Level 24, by contrast, is dubbed Swarm – a high energy space where groups can gather quickly to solve problems. It’s distinguished by brightly contrasting colours, circular motifs and swirling, woven pendant lighting.

Colour palettes intensify in the centre of each floor, around shared facilities like kitchens, ID-card activated lockers, walk-through utility bays and interconnecting stairs, and cool towards individual workstations at the edges. In corners to the east and west are formal, glass-walled meeting rooms surrounded by well used ‘found spaces’ featuring banquette seating by Borcor, moveable ottomans and tables, and panoramic city views that Smith proudly observes “belong to everyone”. In between are meandering paths to a mix of similarly adaptable spaces designed for interaction or retreat – standing-height collaboration areas, for example, and sit-to-stand desks with wi-fi enabled AV facilities for group discussions. Even social spaces like the garden retreat or creative lounge can be used for work when a casual, playful setting feels right.

While these elements all contribute to the wider feeling of wellbeing in the space, the specification of a series of Zip HydroTaps throughout the interior, play a significant role in providing the staff with the very best version of the essence of life. In fact, research suggests that 80% of occupants where a HydroTap is installed drink more water than they did with a standard tap or bottled water. Here, the HydroTaps transform water into the optimum version of chilled, boiled and sparkling every time, which has not only provided the staff with the tools they need to stay hydrated, but has also eliminated the need for water bottles in the fridge and a kettle on the benchtop, creating a clutter free and safe environment.

Subtle nods to Australia Post’s retail operations abound in detailing like tubular copper lighting custom-made by Darkon and inspired by cylindrical post packs, and graphic signage that echoes the distribution maps of posties.

For Maltman, the constant varied use of these myriad spaces (down to features like writable wall surfaces) is sign of employees no longer constrained by old layouts and behaviours and a measure of the project’s success. “People have moved in here and don’t want to leave,” she says. “Everyone sees something different that they love about their workplace .”